BEYOND THE CONICAL BAND APPROXIMATION OF A WEYL SEMIMETAL

Experiments have demonstrated many gapless electronic phases with conical bands. These phases exist within diverse classes of systems comprising graphene and many different topological materials. Low-energy excitations in such conical bands somewhat resemble truly relativistic particles. This resemblance creates a non-trivial analogy between two branches of modern physics that were only loosely connected before. Thereby, condensed-matter physicists can now explore low-energy phenomena which were previously thought to happen only in high-energy physics. The conical bands appear at specific locations in the Brillouin zone, where two or more bands cross each other. These crossings represent only a small part of the whole Brillouin zone. The particular properties of conical bands such as their position, degeneracy, tilt, anisotropy or the departure from linearity are closely related to the crystal symmetry and overall characteristics of the momentumperiodic band structure. Conversely, the presence of the valley-degenerated conical bands means that other features, typical for Lifshitz transitions, such as local extrema or saddle points of merging cones, will also show up.
Three-dimensional Weyl semimetals from the monopnictide family (TaAs, NbAs, TaP, and NbP) are representative examples of materials which are extensively explored today and which display multiple valley-degenerated conical bands in their band structures. In these materials, the Weyl cones emerge in quartets, due to the complex interplay of band inversion appearing at certain positions of the Brillouin zone with spin-orbit interaction. This necessarily leads to the local extrema of bands, and two types of saddle points as illustrated in the Figure, panel (a).Recent high-field experiments on tantalum phosphide, realized in a broad collaboration of researchers from Stuttgart, Grenoble, Paris, Dresden, and Fribourg, and supported by theoretical modelling, show that such specific features in the band structure can be traced via their characteristic magneto-optical response (Figure, panel b). Most notably, the band inversion, leading to the appearance of the local extrema, is found to be responsible for a highly unusual series of inter-Landau-level excitations, which decrease their energy with increasing magnetic field. 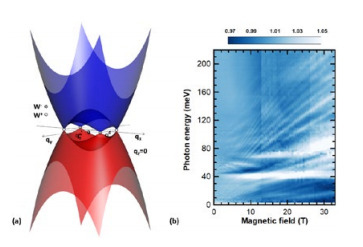 Figure: (a) Band structure of a time-reversal-invariant Weyl
semimetal displaying a quartet of cones. (b) Infrared magnetoreflectance of the Weyl semimetal TaP in high magnetic fields.