Zhe Wang, HZDR Dresden and A. Loidl, University of Augsburg.

In his seminal work entitled “Eigenwerte und Eigenfunktionen der linearen Atomkette” (eigenvalues and eigenfunctions of a linear chain of atoms), published in 1931 in “Zeitschrift für Physik”, Hans Bethe succeeded in finding an exact solution to the one dimensional spin-1/2 Heisenberg model, and predicted the existence of bound states of two magnons in this model. The method that Bethe introduced was later further developed theoretically, and in general bound states of n magnons (string of length n; n is an integer) were predicted for the spin-chain model. Today, the so-called Bethe ansatz is an important mathematical tool of statistical physics. The lack of suitable one-dimensional materials and appropriate experimental methods has made experimental verification of the many-body string states so far impossible. Impressive progress in material synthesis on one hand and the development of optical spectroscopy in the terahertz frequency range in very high magnetic fields on the other hand have now made this experimental detection possible for the first time. In a first step, SrCo2V2O8 crystals were synthesized and characterized at the Helmholtz-Zentrum in Berlin and at the Dresden High Magnetic Field Laboratory in the Helmholtz-Zentrum Dresden-Rossendorf. These crystals, in which the cobalt ions form a one-dimensional Heisenberg-Ising spin chain with spin S = 1/2, were then studied with terahertz spectroscopy in the University of Augsburg and the High Field Magnet Laboratory of the Radboud University in Nijmegen in a wide magnetic field range up to 30 T. By comparing to theory results obtained by scientists from the University of California at San Diego with the Bethe ansatz, length-2 and length-3 string states (Figure) were finally identified in the terahertz spectra of SrCo2V2O8. Bethe’s result is important not only in the field of quantum magnetism but also more broadly in the study of cold atoms and in string theory. Hence, the identification of the string states will shed light on the study of complex many-body systems in general. 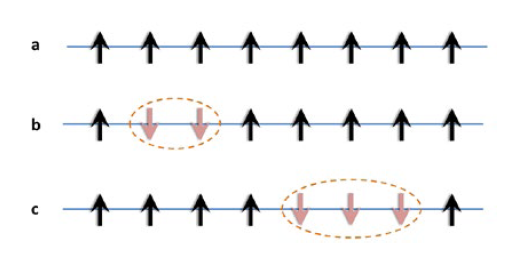 Figure: (a) Illustration of ferromagnetically-aligned spins of the
cobalt ions in SrCo2V2O8 compared to a spin chain with (b) twoor
(c) three-string excitations.