The recently discovered heavy-fermion superconductor UTe2 with superconducting transition temperature of 1.6 K is one of the rare examples of a heavy-fermion material with superconductivity appearing above 1 K. In contrast to the ferromagnetic heavy-fermion superconductors UCoGe and URhGe, UTe2 is paramagnetic. Nevertheless, it exhibits reentrant superconductivity up to unrivalled magnetic field strengths (65 T) among this class of materials. For magnetic fields applied along the crystallographic b direction, the upper critical field is strongly enhanced and equals the first-order metamagnetic transition occurring at Hm = 35 T at low temperatures, strongly exceeding the Pauli limit. Recent studies on the U-based ferromagnetic superconductors have highlighted the importance of the interplay between magnetic fluctuations and Fermi-surface instabilities when crossing the ferro- to paramagnetic quantum phase transition, which raises the question of the precise role of these instabilities in the reinforcement of superconductivity.

Here, we present transport measurements up to 29 T with magnetic field applied along the easy magnetization axis which is the crystallographic a axis of the body-centered orthorhombic structure for which the upper critical field is 6 T. As a function of field, the thermopower exhibits successive anomalies (Figure [a]) at low temperatures, signaling Fermi-surface instabilities. One of them (H1, green squares in Figure [b]) could clearly be identified as a Lifshitz transition. Such a behavior is reminiscent of what we have already observed in UCoGe, i.e., the appearance of Fermi-surface instabilities for fields parallel to the easy magnetization axis (direction with a high magnetic susceptibility). Another striking feature is that the instability at H1 occurs at exactly the same critical value of magnetization (0.4µB ) than Hm = 35 T for fields aligned along b. Finally, recent measurements under pressure for fields along the a direction reveal a peculiar feature in the upper critical field around H1. 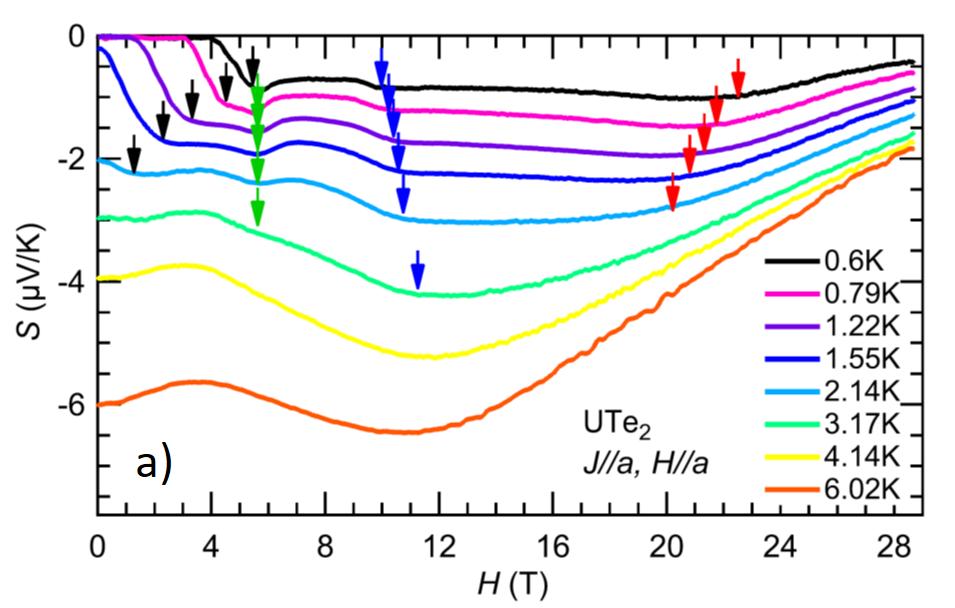 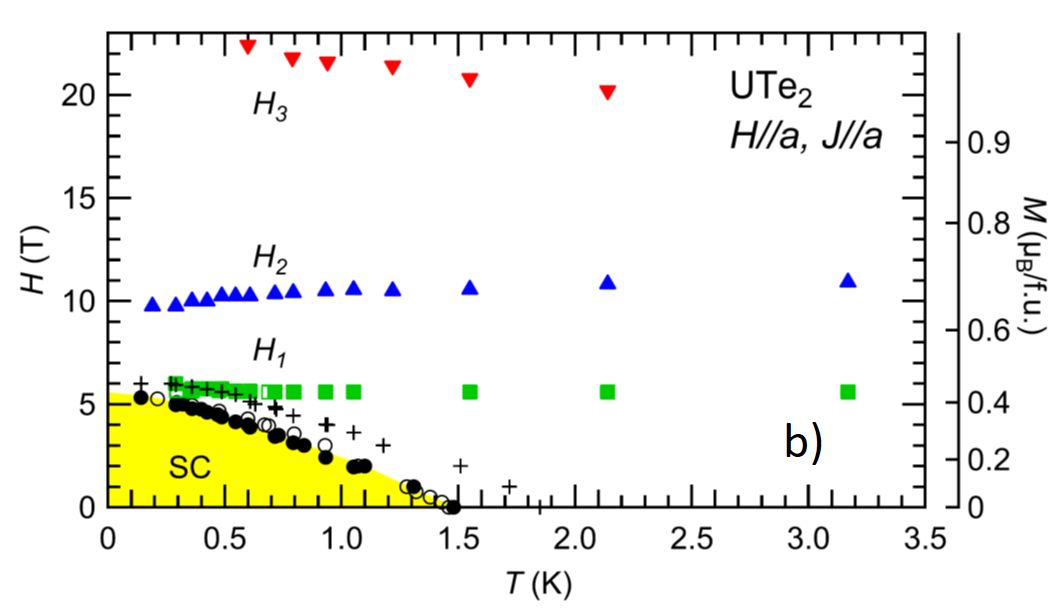 Figure: (a) Field-dependence of the thermopower at different temperatures exhibiting anomalies at the superconducting transition (black arrows) and at 3 successive electronic instabilities (critical fields) for H II a. (b) Magnetic field-temperature phase diagram with the superconducting phase and critical fields, which correspond to specific values of the magnetization.