A quartz-crystal microbalance (QCM) is an ultrasensitive device to detect changes of the mass. When an external mass is coupled to the surface of the quartz micromembrane, the resonance frequency f0 of the QCM decreases. Owing to the high quality factor, Q, of the QCM, a relative frequency change of 10-9 can be resolved. Immersed in liquid, the QCM oscillates still in resonance, but with significantly decreased f0 and Q. This reduction is proportional to (ρη)0.5, where ρ is the mass density and η is the shear viscosity of the liquid. Thus, the QCM is a useful device to investigate the viscous properties of liquids with high resolution.

Viscosity measurements using a QCM in combination with pulsed magnetic fields were developed at the HLD (Figure). In these experiments, we use a commercial AT-cut quartz resonator chip (thickness-shear mode). The advantages to use a commercial chip are the following. First, the QCM is relatively stable and robust against mechanical vibrations and turbulences in liquid. Second, it has high f0 and Q, leading to higher sensitivity. Here, a high f0 is favorable for a high repetition rate as well. Third, the QCM is relatively small and cheap.

During the magnetic-field pulse, f0 and Q of the QCM are measured using a ring-down dissipation monitoring technique, by which we can simultaneously monitor both quantities with a repetition rate of 10 kHz. In this technique, the QCM is intermittently excited by an RF generator. Even after the RF generator is switched off, the mechanical oscillation of the QCM persists with exponential decay. This residual oscillation directly reflects the resonant properties of the QCM, characterized by f0 and Q. The typical resolution of (ρη)0.5 is 0.5 %. As a benchmark, the viscosity of liquid oxygen was measured up to 55 T. 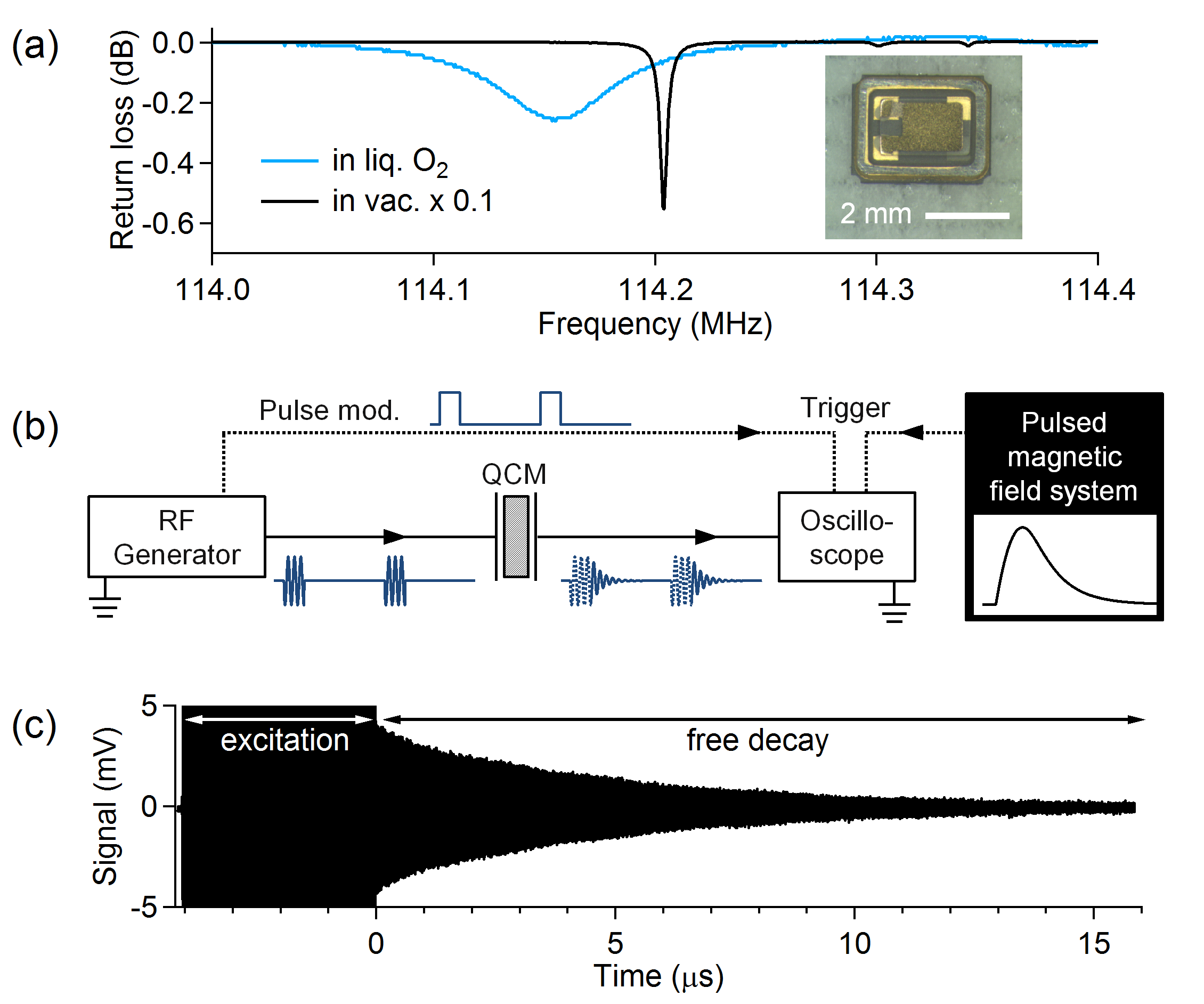 Figure: (a) Return loss spectra of the QCM in liquid oxygen (cyan) and in vacuum (black).The photograph shows the used QCM. (b) Schematic diagram of the ring-down measurement. (c) Typical free-decay curve of the QCM, which is fitted by an exponentially damped sinusoid.

About the Author: Bernd Schröder